While Korean media are busy reporting about the new scandal in the entertainment industry today, another horrifying unresolved case related to sexual assault has been almost forgotten for ten long years.

This is the unresolved suicide and sexual assault case of the Boys Over Flowers actress, Jang Ja-Yeon.

On March 7, 2009, more than 10 years ago, an actress from one of the most successful and popular Korean dramas committed suicide around 4:00 in the afternoon.

Her name is Jang Ja-Yeon. She committed suicide at the age of 29.

Jang Ja-Yeon left a 7-long page suicide letter where she revealed the names of the powerful and influential men who sexually assaulted her as she was trying to build her promising career in the Korean entertainment industry.

It has been reported that Jang Ja-Yeon wrote on her suicide note that she was forced to have sex with at least 30 powerful men from the government, and from the entertainment industry including media executives, directors, and CEOs.

It has been 10 years since Jang Ja-Yeon’s death but the case is still left unresolved.

On July 2018, a witness hiding behind the name “Yoon” revealed her testimony to the public through media interviews. The witness revealed that she witnessed how Jang Ja-Yeon was sexually assaulted.

The witness added, “Meanwhile, he touched where he shouldn’t.”

According to reports, “Cho” is a journalist-turned-politician who used to work as a reporter from one of the popular media outlets in Korea today.

The witness revealed that she tried to testify 13 times to the authorities but her testimonies kept on being rejected.

On December 5, 2018, with the help of Yoon Ji Oh—one of the actresses in Boys Over Flowers, it was reported that the authorities will resume investigating Jang Ja Yeon’s case.

Unfortunately, due to the lack of support from the people and the media for this case to be resolved and for the truth to be revealed, especially that most media outlets are focusing on another scandal in the entertainment industry, the case was again, close to being temporarily closed.

On her live Instagram broadcast, the actress expressed her disappointment regarding Jang Ja Yeon’s case:

“I’m so upset that whenever #JangJaYeon incident issue comes up, there’ll be always another big issue covering. I’ll be updating regularly for the update”

Those who watched the actress’ live Instagram broadcast, then helped Yoon Ji-Oh by signing a petition to extend the investigation on Jang Ja-Yeon’s case.

Yoon Ji-Oh is now under the protection of Ministry of Gender Equality & Family as she officially testified as a witness hoping to reveal the list of the names involved in Jang Ja-Yeon’s case.

This means that the people doing the investigation on Jang Ja-Yeon’s case only have two months left to resolve this case.

Actress, Yoon Ji-Oh, burst into tears upon hearing the news and said she’s happy that her friend’s death is finally going to get the justice she deserves. 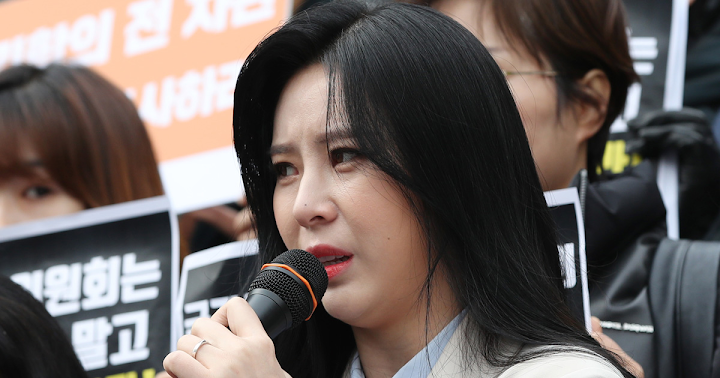 On March 20, 2019, it has been reported that President Moon Jae-In said that the death of Jang Ja-Yeon needs to be reinvestigated.

“There are cases where the truth was buried as investigators intentionally covered them up or didn’t do their jobs properly. Some suspicions remain and numerous questions are still unanswered. The cases have two things in common: influential people are involved and the prosecution and the police didn’t try to find out the truth.”

On March 21, 2019, rumors emerged that Jang Ja-Yeon bribed men in power through sexual favors. However, Yoon Ji-Oh strongly denied all these rumors and said she witnessed how Jang Ja-Yeon was sexually assaulted by influential people.

Yoon Ji-Oh said, “You reported that she provided ‘sexual favors as bribes,’ but did you confirm that such activities had taken place? If you did, then the media, police, and prosecution must know about the injustice experienced by [Jang Ja Yeon] and should clearly disclose it.”

She then added, “It was ‘sexual assault,’ not ‘sexual bribery,’ and her tarnished reputation must be recovered. The secondary damages irresponsibly caused by the media to [Jang Ja Yeon] and myself must be remedied.”

The lead actress of Boys Over Flowers, Ku Hye Sun, showed her support on Instagram for Jang Ja-Yeon’s case to be resolved.

Ku Hye Sun posted on Instagram with the caption:

“The unni who gave me hot packs for my hands. The unni that I regret I don’t have a single photo with. Rest peacefully in heaven. You are a beautiful soul.”

Will they be able to resolve this case in just two months after being ignored in 10 years? Will they reveal all the names of the wealthy and influential people involved in Jang Ja-Yeon’s case? Will truth finally be revealed after waiting for 10 years? These are just a few questions that need to be answered.